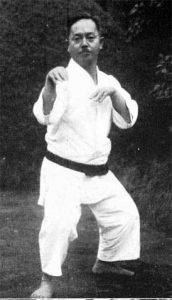 Logo of the Ufugusuku family

If we deal with the history of Shito-Ryu, we always have to mention its founder Soke Kenwa Mabuni. Kenwa Mabuni is one of the most famous karate teachers of the 20th century and considered to be the father of modern karate, along with grandmasters like Gichin Funakoshi and a few others. Born on November 14, 1889 in Shuri on Okinawa, he came from a well-known Okinawan noble family and was a 17th generation descendant of the famous bushi Ufugusuku Kenyu (jp. reading: Onigusukini).

As a child, Kenwa Mabuni was weak and prone to illnesses. Perhaps because of his weak constitution, he was introduced to the art of karate by an employee of his fathers’ house at the age of ten. It’s said that the employee taught him the basics of a kata called Naihanchi. At the age of 13, he began studying Shuri-te (also known as Shorin-Ryu) under grandmaster Anko Itosu and diligently trained under his guidance for several years. It can be assumed, that Mabuni began intensive karate training upon the advice of his father to improve his health and strengthen his body, and because of the fact that Mabuni was also impressed by the stories of the heroic deeds of his brave ancestors.
Only seven years later, at the age of 20, Mabuni was introduced to another great master of that period called Higaonna Kanryo by his friend Chojun Miyagi who was also a student of him. Mabuni started to learn Naha-te (also known as Shorei-Ryu) under him with the same full commitment like he did under Anko Itosu.

Although he remained true and loyal to these great masters and their teachings, after completing his studying and military service, and entering the police service, he looked for further lessons from other great masters as well. For a period of longer time, he was also a student of Arakaki Seisho who taught him a Naha-te style similar to the one by Higaonna Kanryo. Under him, he learned his karate style and bojutsu. He also learned Saijutsu under Shimboku Tawada, bojutsu in the tradition of Speishi under Jino Sueyoshi and the style of the white crane under the Chinese master Wu Xianhui who was a tea merchant also known as Go Kenki.

In 1929, Kenwa Mabuni moved forward to Osaka to become a full-time karate instructor teaching at universities and police departments. In his concept of karate, he developed his karate style by mixing the teaching of Itosu and Higaonna. Originally, he called his style Hanko-Ryu but later changed its name to Shito-Ryu to honour both his two influential teachers by deriving the name of his karate style from the kanji characters in their names: Itosu (= Shi) and Higashionna (= To).

In Germany, Shito-Ryu is still a small karate style, but in the karate world, it’s regarded as one of the four main styles: Shotokan, Wado-Ryu, Goju-Ryu and Shito-Ryu. The special feature in Shito-Ryu is the high number of katas.

Soke Kenwa Mabuni died on March 23, 1952 at the age of 62. His son Kenei Mabuni became together with his brother Kenzo Mabuni his heir and also the co-successor as head of Shito-Ryu.

We use cookies on our website to give you the most relevant experience by remembering your preferences and repeat visits. By clicking “Accept”, you consent to the use of ALL the cookies.
Cookie settingsACCEPT
Manage consent

This website uses cookies to improve your experience while you navigate through the website. Out of these, the cookies that are categorized as necessary are stored on your browser as they are essential for the working of basic functionalities of the website. We also use third-party cookies that help us analyze and understand how you use this website. These cookies will be stored in your browser only with your consent. You also have the option to opt-out of these cookies. But opting out of some of these cookies may affect your browsing experience.
Necessary Always Enabled

Performance cookies are used to understand and analyze the key performance indexes of the website which helps in delivering a better user experience for the visitors.

Analytical cookies are used to understand how visitors interact with the website. These cookies help provide information on metrics the number of visitors, bounce rate, traffic source, etc.

Advertisement cookies are used to provide visitors with relevant ads and marketing campaigns. These cookies track visitors across websites and collect information to provide customized ads.

Other uncategorized cookies are those that are being analyzed and have not been classified into a category as yet.